If you were unable to make it this past Thursday to FMDS’s annual fashion show, do not fear! Here is everything you missed and more!

On April 13, coordinators Channing Cason and Sarah Minnix had the entire Commonwealth ballroom in Squires looking like an underwater fairy tale. With blue and green curtains hiding the backstage from onlookers, white lanterns, and tea lights in mason jars lining the stage, the only thing that was missing were Ariel and Sebastian!

I have only been to two fashion shows in my life. The first time, I was sitting front row gazing upon the beautiful models as they strutted their stuff down the runway, but this time, I was that model being gazed upon.

Auditions were held in late January/early February and lasted for two days. Originally, I was not going to audition because I’m a rather curvy girl and you don’t typically see curvy people walking the runway, but my dear friend De’Angelo convinced me to go through the process with him, so I did. The girls were told to wear all black with high heels and guys were told to wear jeans and a black top with their choice of shoes. Nearly 70 people auditioned so the pressure was high. But, with the help of Jasmine Johnson, our fellow model/coach, the process was smooth and fun!

About a week after auditions, results came out via email and I got the position! To make the moment even more amazing, I found out I would also be walking with my two friends, Lea Neumann and De’Angelo Haynes.

Practices began March 1, but were not considered mandatory until April. They ran very similar to the auditions, right down to the uniforms (girls in all black and guys in jeans with a black top). Student designers got the chance to pick what model(s) they wanted to strut in their creations. I was chosen by the lovely Angela Beckett along with my fellow model, Lydia Wagoner. Time continued to go as such, with designers working on their masterpieces and us models strutting it down the Wallace Atrium. Flash forward, it’s now April and practices have become mandatory, resulting in a noticeable increase in attendance. Next came boutique fittings and designer fittings, dress rehearsals, and a photo shoot. The photo shoot, mind you, was held on the coldest day in April. Typically, you would imagine April as warm and very Spring-like, but not on this particular day. Especially with the bear minimum of clothing we all had on, it is a wonder how we didn’t turn into Frosty the Snowman!

Next thing we knew, the day of the show was upon us. Models had to arrive backstage as early as 1:30pm get their hair and makeup done. Keep in mind, the show was scheduled to start at 8pm so that is a long time sitting backstage with pounds of makeup resting on your face. After we were all done up, it was 6:30pm; an hour and a half until showtime. We did one final run-through of the show to ensure everything was perfect and ready. The time before show officially began seemed to drag on forever; it was like 8 was never going to arrive! But, of course, it did, and the nerves started jumping, but there was no time to let it get the best of us; Sarah and Channing made a brief introductory speech and then it was showtime. 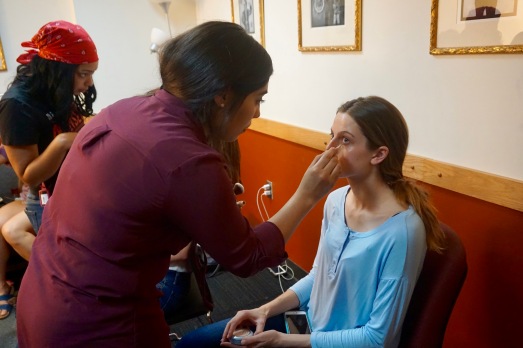 First, we showcased a few local boutiques located here in Blacksburg and then it was time for the student designers. They had been working for days upon days to get their designs done in time for the show, along with their other scholastic requirements. During the show, the time backstage when we were standing in line waiting for our turn to walk was honestly the worst. It is the most nerve wracking feeling just standing there waiting like sitting ducks hoping that when you do get up there, you don’t eat the stage. But, just like everything else, the minute I set foot on that stage, my nerves disappeared. I could think of nothing other than walking like I owned the stage. But it really helped that the lights were bright enough that I could not see the audience. Before, I knew it, the show was over and I was changing out of my designer clothes for the last time.

After the show, I spoke to my friend De’Angelo Haynes who was a model and designer for the show to see what it was like to design for such a big event here at Virginia Tech.

ME: What made you decide to do both modeling and designing for the show?

De’Angelo: I have always wanted to be a model, but never had the confidence. So at first, I didn’t put much thought into the show, but then one day my professor, along with Sarah Minnix, told me I should audition to model and after I showed her my designs, she recommended that I design and model for the show, so I did! I thought to myself that if I don’t get the model part, that’s okay because I will still design for it. It was a lot easier being able to design for myself, too.

ME: Would you do it again?

De’Angelo: Absolutely! By the end of the show I was already asking around if anyone knew what the theme for next year would be so I could get to designing! Being backstage was too much fun, I have to come back!

ME: What would you say the overall experience was like for you?

De’Angelo:  Exhilarating! It was absolutely a dream come true. I used to always watch America’s Next Top Model and sing along to the theme song. They always said, ‘do you want to be on top?’ well, that night, we were on top!

From the audience perspective, I decided to talk to my aunt Dolores, who was once a buyer for Bloomingdale’s and even a model herself, to get her perspective on the show as someone not directly involved. 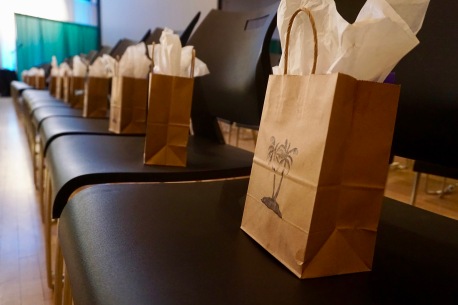 ME: What did you think, overall, about the show? In terms of production, set-up, etc.?

Dolores: I liked the fact that the models were all figure types and not just toothpicks. That helped the clothes appeal to a larger crowd. Coming from someone who has been involved with numerous fashion shows, I can tell you the show was very well orchestrated. It’s crazy just how much work goes into these shows that the audience is completely blind to.

ME: Is there anything you would have done differently with the show? Any constructive criticism?

Dolores: The first thing that crossed my mind when the show started was it seemed very ready-to-wear. A lot of the clothes I saw looked like something you’d see walking around campus. However, this differentiation made it very easy to be tell the difference between boutique clothing and the student designers. But, I found some of the models to be a little too stiff, as if they were very uncomfortable being on the runway. I would say for them to relax a bit more, I know the nerves are intense, but you can’t let the audience notice! Also, I noticed a lot of similar fabrics being used so I don’t know if they had a certain pile of fabrics they had to choose from or if it was just coincidence, but too many girls walked out in some form of tool or silk and it felt very repetitive; not enough diversity, it was hard to tell when one designer ended and another began.  But, I don’t want to end on a bad note; everyone, overall, looked amazing. The annual fashion show is a great opportunity for student designers to showcase their creations to a larger, more diverse, crowd.

Being apart of Washed Ashore in the way that I was, as a model, was unforgettable in every way. It’s something that will I would recommend someone doing if they have social anxiety because it really helps; people always say the best way to conquer your fears is to face them. I look forward to next years show and I hope to be apart of it in some way again! 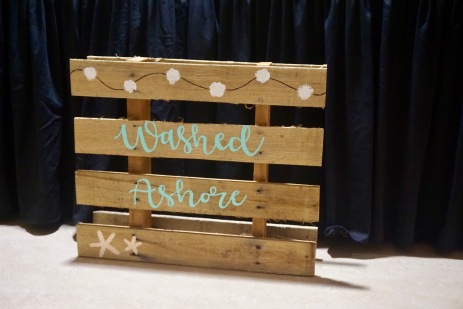 I cannot finish this article without saying thank you to the stagers. They all worked so hard backstage, doing so many things ranging from fixing a broken clothing rack, pinning a bra strap back together to, quite literally, stripping us models from head to toe. They did so much for us and without them, it would have been a complete mess backstage! The amount of work stagers do backstage is only a piece of the insanity that occurs during a fashion show that the audience is unaware of that, I feel, deserves some recognition!

Also, let us not forget Channing and Sarah for all their hard work because, quite literally, without them the show never would have occurred. They had been organizing this show for an entire year and all their hard work definitely paid off because the show was perfect!