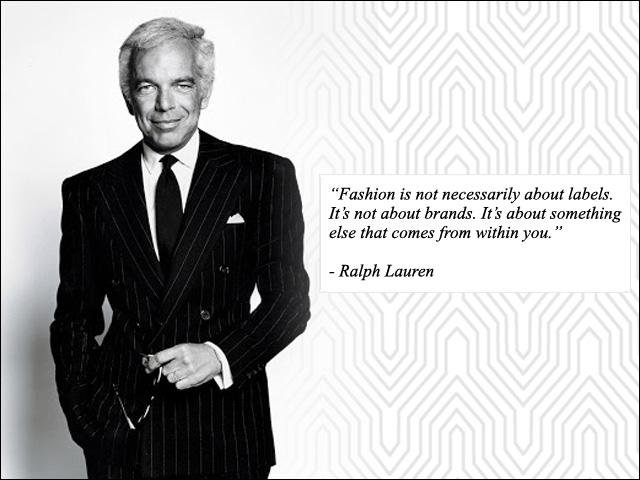 I’ve been a passionate fashion follower since elementary school. I always wanted to study fashion in the hopes of getting into the industry upon graduation. As I’ve grown up, my passion hasn’t faded in the slightest and now I’m pursuing a major in fashion merchandising and design. However, I’ve met a ton of people that have the same misconceptions of fashion majors/enthusiasts and of the industry, mainly in college since I go to one of the top engineering schools in the country, but don’t study anything close to that field. The ignorance has infuriated me so much that I felt I needed to take time to inform everyone about the industry and its people to put an end to it all. Let’s begin.

We Are Actually Intelligent People

My best friend from high school started college as a pre-med student. After a year, he realized medicine wasn’t his passion and that he was pursuing that career for the wrong reasons. He soon switched to an economics major with the intention of being in the fashion industry later on. When I heard this, I was incredibly happy for him, not because I’m bias (ok, maybe a little), but because it takes a lot to change majors and pursue something YOU want to do and not stick to a major just because it will get you a high-paying job. I had so much respect for him and I still do. However, a couple of weeks ago, he called me and said he was re-evaluating things because he thought people who didn’t know him would think he wasn’t smart and the people that did know him and knew how smart he was (graduated with over a 4.0 gpa and knows multiple languages) would think he was wasting his intelligence by going into the fashion industry. I completely understood where he was coming from. Every time I tell someone my major, I feel the need to explain myself to reassure them that I’m smarter than they think just based off of what I study. I’m not sure where this negative judgment came from. Why do people think that because you’re a fashion major, you’re not smart? I believe this comes from the stereotype that because you’re a fashion enthusiast, that means you’re a materialistic bimbo who just likes to shop. Don’t get me wrong, there are some of those people, but just like any major, you have the people who slack and then the people that excel. I’ve met a lot of people in my major that are intelligent, hard-working, and driven students. Many, like myself, are very involved around campus and take classes seriously. Moreover, the same people who want to degrade fashion students are the same ones who can’t even name 3 classes we take or accurately describe what this major entails. Did you think marketing management, management theory and leadership practice, accounting, and 3 types of economics were any of the classes we took? Didn’t think so. Lastly, does anyone realize how huge the fashion industry is? Try a $1.2 trillion dollar global industry and $250 billion in the US alone. Do you think a bunch of dumb people managed to build and grow successful fashion businesses worth billions of dollars? It’s impossible.

Any time I tell someone my major, the follow-up answer is “Oh, so you wanna be a designer?” I get it, if you don’t know about the industry, that’s the first thing you think of, but I’m getting tired of it. Don’t get me wrong, I have a lot of respect for designers and everyone should too. You know how hard it is to come up with new, innovative designs and having people accept them? Especially when fashion has been around for centuries, it’s hard to be creative and produce something totally new and have it be successful. And there’s more to designing than just drawing some cute dresses. Designing is only one part of being a fashion designer. You’re building a whole brand/company which requires you to know your customer, your competitors, your price point, production costs, etc. To every designer there has to be a business person. If you don’t have the business intelligence, it’s hard for your brand to be successful. Do you think brands like Louis Vuitton and Celine were always billion dollar brands? Sure, they grew recognition for their designs and craftsmanship, but hit a road block at one point early on where they were on the brink of going out of business until they were salvaged by businessman Bernald Arnault who used business strategy to make them as successful as they are today and create the billion dollar conglomerate LVMH (he was shady about how he did it, but that’s a different story). But, it doesn’t just take business savvy personnel to save a brand. Before Gucci was, well Gucci, it wasn’t perceived as a luxury brand by any luxury good client. In the 80s, the brand was taken over by a Harvard-educated lawyer who completely relaunched the brand by hiring a whole new team which included the well-respected designer, Tom Ford. Ford took the brand in a new direction with his designs and it was well received. Because of this, the brand’s sales quadrupled in 2 years. Conclusively, you can’t have fashion without the business side and you can’t have a successful brand without the right designer(s). You can be creative all you want, but you must have some knowledge of business as well. So, you can be studying fashion merchandising with the intention of going into the business side by being a buyer, doing fashion marketing, etc. But, even if someone wanted to be a designer, they should still get more respect than they currently do by outsiders. Being creative is a quality trait that not everyone has and it’s a powerful one, not just in fashion, but in any industry. If you continue life doing the same things everyone else does, you’re not going to help yourself grow and be successful and that’s true in all industries.

We Are In An Extremely Competitive Industry

Like most industries, the fashion industry is super competitive and many people don’t realize that. They think this is something anyone can do, but it’s really not. If it was, everyone would have a job upon graduation and they don’t. And if fashion students get a job, their salary isn’t the biggest and yet, they most likely end up getting that job in some of the most expensive cities in the country. Knowing you’re studying something that is really competitive and that the starting pay is low is discouraging, but having the willpower to keep going because it’s something you’re super passionate about is something that should be respected, especially in today’s society where money means everything. People associate money with happiness and respect. If you say a major that people know doesn’t make a lot of money, you’re looked down on, but to me, that would earn my respect. I’ve heard people who don’t love what they’re studying, but stick with it because it’ll make them good money, and that’s just sad to me. I would much rather be doing something I love and will learn from and earn less than be doing something I hate and earning a lot of money. People have got to stop being so superficial and stick to things that really matter. 2017 has been a sad year for me. I’ve lost people in my life, 2/3 unexpectedly, and it opened my eyes even more about how short life is (cliche, I know) and that you have to start doing things for yourself because we all act like we are guaranteed to wake up and make it through the day when in fact we are lucky to even wake up in the first place. But, getting back to my initial point, the reality is you get yourself into a competitive industry, aren’t going to make a lot to start off with, and have to fight your way to the top to get the position you want and the right salary to make a decent living working in a large city. That takes dedication and is not something to be laughed at. Have more respect for what we do.

We Are Not Superficial

This is one of the most frustrating stereotypes to deal with. Most people think of fashion and think of big designers which they correlate with high price-tags, so when they hear someone loves fashion, they think of those price tags and think that how much money we spend is what’s important to us. It’s not. At least not to the people who are genuinely into fashion. Fashion enthusiasts love it because of the brands and their history, their legacy, their craftsmanship, their designs, and their message. No big designer has ever started with the purpose of just making clothes and making a lot of money; there was always a meaning behind what they do whether it be a political/social statement or simply to make people feel confident. There’s a lot of history people don’t know, and this is the reason why we are fascinated by fashion. It’s also just the work itself. Fashion is walking art. Sure, you see the ready-to-wear clothes, but there’s so much more out there. It may not always be pretty and wearable, but that’s not always the point. We value the purpose of fashion and that by no means make us superficial. People also associate fashion lovers as being people who just want to go shopping and of course most of us do (fun fact: not all fashion lovers like dressing nicely and going shopping. Most people in my major show up in sweats and sneakers to class), but there’s more to us. I like adventure and doing fun things like go-karting, or zip-lining or roller coasters. It’s not anything crazy, but imagine how annoyed I was when I grew up going to amusement parks, but when I went to an amusement park with friends in college, they were surprised I wasn’t scared of the roller coasters. Major eye roll. Just because I like fashion doesn’t mean I’m some prissy, scared girl who’s afraid of breaking a nail.

One last point I’d like to make is everyone cares about fashion or is effected by it in some way. I’ve constantly heard people say “I don’t care about fashion. I don’t care what I wear”, but you do. Just because you don’t want to dress up all the time, you still care about what you’re wearing. You may wake up and go to class in what you slept in because you want to be comfortable. Everything you wear is based off a decision you make for a specific reason. You wouldn’t wear a dress if you wanted to be comfortable and you wouldn’t wear sweatpants to a job interview because you want to look professional. You care because you care how you feel in what you wear and that’s what fashion is about as Ralph Lauren says, “Fashion is not necessarily about labels. It’s not about brands. It’s something else that comes from within you.”

It’s natural to make quick judgement on everything, so I try not to take everything personal, but going into my junior year of college as a fashion student, I’ve reflected on my time at Tech so far and remembering all these instances really frustrated me, so I figured I’d educate you all to help alter your perspective on us a bit. There’s always so much more than you know about any situation. Try not to be so quick to judge.