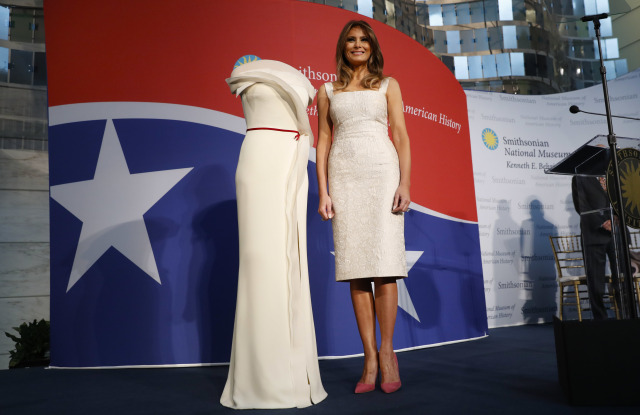 Throughout the centuries of United States First Ladies, many of the women wed to the president of the nation managed to make their mark on the country as well. Influential through dedication, philanthropy, and even sometimes political policy, the First Lady is an image of polish and poise alongside one of the most influential men in the world.

Nevertheless, as the Donald Trump presidency has taken us for many turns, so has its First Lady, Melania Trump. While the latest First Lady has made stances on certain issues, mostly involving the well-being of children, she also also put herself in several hot seats not for her philanthropic stances, but for her fashion.

Being the partner of the president comes with attending plenty of events. From the inauguration, to balls, visits, and interviews, a part of the First Lady’s impact is dressing to impress. The Smithsonian American History Museum even exhibits highlights of First Lady fashion, from a silk gown of Martha Washington to a yellow evening dress of Jacqueline Kennedy and Michelle Obama’s silk chiffon inauguration gown. Needless to say, the museum was given one of Melania’s best dressed for display, her inaugural ball gown. However, what highlights her fashion reign are controversial downfalls rather than lovely gowns.

Coincidence or not, the controversy began before Melania’s husband was even inaugurated when she wore a “pussy-bow” blouse. This blouse, a hot pink $1,100 Gucci piece may have been eye appealing, but simply had bad timing when she wore it to the final 2016 election debate. This debate swirled with pre-debate turmoil sparking controversy on both sides in relation to misconduct against women. Days before the debate, the infamous Access Hollywood tape of Donald Trump saying ““When you’re a star, they let you do it. You can do anything. Grab ‘em by the pussy,” was released. Maybe wearing a “pussy-bow” blouse was not the most suitable nor settling response.

When typing “Melania Trump” into Google, the third suggestion from the drop down menu, only below her name and age, is: Melania Trump jacket. Since the 2016 blouse controversy, there have been milder outrage over her more expensive and unfitting style choices. However, the biggest fire came when she sported a jacket saying “I REALLY DON’T CARE. DO U?” This was not an over $1,000 Gucci piece either, it was an affordable $39 Zara jacket. She chose to wear it when visiting a detention center in Texas for children separated from their families at the Mexican border. Typically her disputed fashion choices remain conspiracy as she leaves them encrypted with her lack of response, but this one seemed to be spelled out loud and clear. Many cared extremely about her blatant carelessness, believing it could not possibly be tone deaf to pick this jacket for that moment out of the millions at her discretion. “I wore that jacket to go on the plane and off the plane,” Melania responds in an ABC 20/20 interview. “It was for the people and for the left wing media who are criticizing me and I want to show them, I don’t care.” Later in a rare response to her fashion critics, she added, “I wish people would focus on what I do, not what I wear,”

Most recently, in October during her solo trip to Africa, Melania sparked feud again with her perceived poor fashion taste. Sporting several fashionable outfits to meet people of several African nations, the trip turned sour when she visited Kenya. With the trip’s usual palette of white and khaki, one specific outfit was topped by a pith helmet. This headwear, also known as the safari helmet, was worn widely by Europeans during the 19th century imperialism era in which global powers seized much of Africa into colonialism. Thus, a European American woman visiting Africa wearing such a retrospectively negative piece struck many. Nevertheless, it sat beside her during her 20/20 interview as if it was a publicity stunt of a statement or lack thereof.

With this current presidency, there is simply no telling what will come next. The American people lack assurance so much that the First Lady’s fashion is even up for uncertainty, conspiracy, and debate. Of course there are bright highlights in her clothing choices, such as her simple white inauguration ball dress and baby blue inauguration ceremony dress. Yet still, from her platform, she is naturally always up for scrutiny and her darker moments smear the highlights. Even a yellow cape gown she wore likened her by some to an imprisoned Disney princess, that being Belle from Beauty and the Beast. We can only hope that Melania’s future fashion decisions carry more thought and care or at least steer clear of controversial garments, unless she is actually trying to make certain statements.

One thought on “Has Melania Trumped the Triumph of First Lady Fashion?”