Once again this year, more disturbing allegations in the fashion industry have emerged, with Gosha Rubchinskiy being the latest designer to fall into this pit. Earlier this week, a 16 year old Russian model released screenshots of a conversation he had with the famous Russian designer. The boy stated that Rubchinskiy direct messaged him first, in what appeared to be an opportunity for him to be apart of one of Gosha’s next shoots. During the conversation, Gosha came off pushy, asking for the boy to send pictures of himself in the bathroom without his parents finding out about it. Below are the screenshots of the conversation released by the boy. 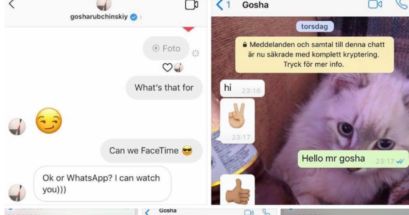 Following the leaks of the conversations, members of the fashion magazine Hypebeast pushed Gosha’s team to respond to the allegations, receiving this statement in response.

Shortly after this, Adidas announced that they would begin investigating the allegations with Gosha, as the two have had many collaborations since 2017. Gosha’s impact on the Russian youth culture has been tremendous, which is why we often seen Russian teens in his shows and look-books. However since then, more allegations have came out, with more screenshots of conversations which are much more inappropriate.

These messages reportedly were sent in October, in which apparently Gosha later unsent messages asking the boy to take pictures without any underwear on. Whether or not the allegations are true, his image and brand have taken a beating. A large amount of sellers who have Gosha listings on Grailed, an online fashion marketplace, have dropped their asking prices tremendously.

This year alone has had many other allegations alike in the fashion industry like A$AP Bari, Ian Connor, and Mario Testino. I doubt Gosha can retain his popularity and image after this, regardless if he is found innocent. His “love” for youth Russian models seems too much of an excuse for his personal pleasure.