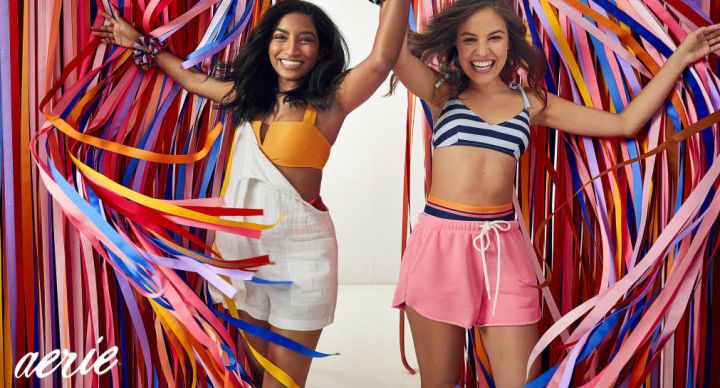 With almost six years of body positivity campaigns behind us, Aerie continues to make great strives to be “real” with customers. In 2014, the sub-brand of American Eagle that provides women with comfortable lifestyle and intimate apparel, promised their customers they were going to stop airbrushing models. They also committed to using a variety of models of different ethnic backgrounds and sizes. This movement was a push for their new pledge #AerieREAL.

Two years later, Aerie debuted its first “role model”, Iskra Lawrence, a British model and activist, as the face of the platform. They’ve proceeded over the years to follow through with their platform by creating a new bra shopping experience aimed at spreading more body positivity and woman encouragement in their stores. They’ve continued to add on to the “role model” roster over the years by adding gymnast and advocate Aly Raisman, Paralympian snowboarder Brenna Huckaby, blind Youtuber and motivational speaker Molly Burke, as well as entrepreneur Jenna Kutcher, and they weren’t stopping there.

But what exactly will these women do as #AerieREAL role models?

These thirteen strong, amazing women are given the role to “empower and inspire the Aerie community to be the change they want to see in the world.” Whether that be through leadership, advocacy, or philanthropy, these women are given the responsibility to encourage all women to be game changers, while also doing the same themselves.

“Six years ago, Aerie took the game-changing leap to stop airbrushing its models—which ignited a body positivity movement that has empowered women around the world to let their real selves shine,” Jennifer Foyle, Aerie Global Brand President, released,“We believe everyone has the power to be a changemaker.”

But, Aerie doesn’t stop there either.

Continuing to commit to being a company that creates exceptional merchandise while also encouraging their customers to view themselves and other women in a positive light, #AerieREAL also launched a social media contest to give away $400,000 in grants to 20 women who make positive changes in their local communities.

“Aerie recognizes there is still work to be done and understands the importance of challenging the stereotypical standards of beauty, which helps give its customers a voice,” says the Aerie announcement  on the AEO Inc. website.

Where one company struggled, another saw potential. And as we all can see, they are continuing to change the game, positively.

•To learn more about this amazing campaign, visit Fashionista or WWD. To share your story and enter #AerieREAL, visit AE.com.•